Since graduating in 1979, Moustapha Soumaré has had over 40 years of extensive experience in several policy, management and leadership positions of increasing responsibility both in his country and at international level in several countries across Africa, Europe and the UN HQ in the USA. Moustapha Soumaré is currently member of the Board of Directors of the Peace Operations Training Institute (POTI). From 2015 to 2020 he served as the Deputy Special Representative (Political) for the UN Mission in the Republic of South Sudan (UNMISS). From 2012 to 2015 he was the Deputy Special Representative of the Secretary-General for the UN Organization Stabilization Mission in the Democratic Republic of Congo (MONUSCO), UN Resident Coordinator, Humanitarian Coordinator and Resident Representative of the United Nations Development Programme (UNDP). Prior to that, he served as the Deputy Special Representative of the Secretary-General for Recovery and Governance in the United Nations Mission in Liberia (UNMIL) from 2009 to 2012. He served as Deputy Assistant Administrator of UNDP and Deputy Regional Director for the Regional Bureau for Africa in New York from 2007 to 2009. He was UN Resident Coordinator and Resident Representative in Rwanda from 2005 to 2007, and Benin 2000 to 2005. He served as Research Director April through October 2006 in the Secretariat of the General High-Level Panel on UN System-wide coherence in the areas of development, humanitarian assistance and the environment. 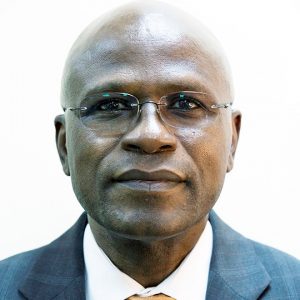