Gender, Peacekeeping, and Operational Effectiveness: Recommendations for the Deployment of Women in Peacekeeping Operations

In the twenty years following the adoption of the first United Nations Security Council Resolution on Women, Peace, and Security (WPS), the integration of women to peacekeeping operations has become a priority for several international security organisations and national armed forces. The Canadian government and the Canadian Armed Forces (CAF) have become leaders in the implementation of the WPS Agenda. As they look for ways to increase women’s meaningful participation to peacekeeping operations, the context of every mission should be prioritised before a fixed number of women peacekeepers.

Women’s participation to peacekeeping has been tied to operational effectiveness since the 1990s. The 1995 Beijing Conference, the Windhoek Declaration, and the Namibia Plan of Action highlighted the link between the presence of women and resilience of peace, postulating that principles of gender equality are essential for the effectiveness of peacekeeping operations (United Nations, 2000). UN Security Council Resolution 1325 (2000) materialised civil society’s advocacy in a political engagement to increase the participation of women and led the way to a series of UN Resolutions on WPS. Since then, the UN and other international security organisations have adapted their policies and practices to reflect WPS principles, and made the meaningful participation of women in all aspects of peace and security a priority. With its Uniformed Gender Parity Strategy, the UN’s Department of Peace Operations (DPO) seeks to reach 15% of women in military contingents and 30% of women in police forces in all contingents deployed by 2028. NATO adopted a policy to support the UN Resolutions on WPS in 2007, noting that “representation of women across NATO and in national forces is necessary to enhance operational effectiveness and success”. Through the Elsie Initiative for Women in Peace Operations, launched at the 2017 UN Peacekeeping Defence Ministerial in Vancouver, Canada committed to reach a UN target of 15% of women in uniform in every peacekeeping operation by 2028. The Elsie Initiative aims to increase the meaningful participation of women in peace operations and sees gender as a way to enhance operational effectiveness.

Similarly, most academic research on women in peacekeeping examines the positive impact of women in blue helmets. Think-tanks and NGOs’ publications also focus on finding ways to increase women’s participation in all aspects of peace operations. In recent years, numerous research publications have proposed several ways in which women peacekeepers increase operational effectiveness. The claims can be synthesised into six categories of propositions:

These propositions all share the idea that women bring something different to peacekeeping operations, therefore contributing to increasing their effectiveness.

There are several problems associated with the operational effectiveness argument. Some researchers have pointed out that an argument capitalising on the particular skills of women reinforces gender roles, promotes an essentialist view of women and places unfair expectations on deployed women. The militarisation of the WPS agenda[1] is also seen as a real danger. Crucial goals of the WPS agenda, notably gender equality and the pursuit of peace, risk being co-opted by military imperatives in service of security; this is especially so in a global pandemic context where pressing human security and health issues have put gender equality on the back burner.

Another problem is the lack of empirical knowledge to substantiate claims related to the positive impact that women peacekeepers have on different aspects of a peacekeeping mission’s effectiveness. Many propositions laid out above rely on limited or anecdotal evidence. Pointing at this lack of empirical research, and at the difficulty to establish causality between gender and operational effectiveness, a growing number of scholars have reacted to current policies aimed at promoting women’s participation to peacekeeping. They question the assumption that there is a direct link between the number of women engaged in peacekeeping and the effectiveness of the mission.

In addition to the limited empirical knowledge substantiating them, most propositions do not clearly indicate how gender, not just an increased presence of women, affects operational effectiveness. This points to the need to differentiate between gender and sex when analysing the deployment of women in peacekeeping missions. How do gender, femininity, and sex affect operational effectiveness?

For example, a woman peacekeeper, despite wearing fatigues and a helmet, can most likely be easily identified as a female (sex appearance). Her behaviour (gender performance) will vary according to her personal motivations as a woman, soldier, and peacekeeper; if she wants to fit in and be “one of the boys”, or prove herself, she might adopt behaviours more typically associated with traditional masculinity, such as smoking, swearing, or being more assertive. A peacekeeper’s behaviour is in turn interpreted by the other actors with whom she interacts, creating complex gender dynamics.

The appearance of sex, performance of gender, and interpretation of both thus have the potential to become equally important in the way women peacekeepers behave and are perceived. A peacekeeper’s gender performance affects the way she approaches and accomplishes tasks and influences how other interact with her. As a result, gender, conceived as both sex appearance and gender performance, is a factor susceptible to have an impact on the way a peacekeeping mission is carried out, affecting its overall effectiveness.

Looking at operational effectiveness as a process is more promising. Literature on gender and peacekeeping, even if it does not clearly define it, provides insight on operational effectiveness. Researchers have argued that gender is a force multiplier, allowing for the performance of more tasks, or different type of tasks – hence contributing to enhance operational effectiveness. A study examining the performance of Female Engagement Teams (FET) in Afghanistan, even if they did not operate in a peacekeeping context, are particularly insightful. Notably, the effectiveness of US Marines and Army FET has been evaluated based on the input of tasks affected by gender. In a study of the implementation of UNSCR 1325 in Afghanistan, Olsson et al analysed day-to-day tasks and activities which were improved, or could have been improved, by having more female soldiers. The process, more than the result, is what is examined here.

This task-oriented vision of effectiveness focusses on tactical level tasks of individual peacekeepers. Consequently, it conceives operational effectiveness as the performance of tasks contributing to the realisation of a peacekeeping mission. This multilayered understanding of operational effectiveness allows for a more comprehensive analysis of the roles of women in peacekeeping missions. The tasks performed by women and the contexts in which they execute them can be broken down to isolate instances where gender performance or sex had an impact.

Guided by the conceptualisation of gender as performance and operational effectiveness as process, an analysis of 25 in-depth interviews with Canadian peacekeepers deployed in 1990s peacekeeping missions[3], confirmed that multiple factors, including gender, influence the performance of tasks in complex peacekeeping missions. While these results cannot be universalised, they empirically illustrate the role of gender and sex in different peacekeeping contexts, thus constituting a first step towards understanding the relation between gender and operational effectiveness.

The number of women deployed in peacekeeping contingents should be adapted to the operational environment and its cultural specificities, not fixed at a certain percentage. The impact of gender and sex is context-specific. Cultural norms regarding the roles of women – in families, communities, societies, politics, military institutions, etc. – as well as societal norms regarding foreign women and armed forces matter when it comes to interactions between women peacekeepers and locals. In some contexts, gender could be detrimental to interactions. It could also be completely irrelevant, or less important than factors like language or religion. In addition to the context, the type of peacekeeping should also be considered. Wider, multi-dimensional peacekeeping missions offer much more opportunities for such interactions than traditional peacekeeping, and even more so than stability interventions. Missions mandating a peacekeeping force to support civilians and humanitarian needs or to keep factions apart should dictate the need for an increased number of women in precise roles rather than an absolute percentage requirement.

In order for gender and sex to have a positive influence on operational effectiveness, women peacekeepers should be employed in roles involving contact with local population or interactions with opposing forces. To be in keeping with the spirit of the WPS agenda, the roles in which women peacekeepers are employed matter. For example, having a certain percentage of women concentrated in the support tail of a mission or flying aircrafts does not contribute directly to enhancing operational effectiveness. The impact of feminine gender performance and sex depends on other actors’ perceptions and reception – local men, women and children, combatants, or peacekeepers. Gender and sex are therefore most effective in the performance of the type of tasks involving interactions with those actors: intelligence gathering, engaging local populations, negotiating with opposing forces, among others. Specific examples of tasks include presence patrols, providing medical care to women and children, and supervising civilians working for the peacekeeping force.

[1]In feminist literature, militarisation refers to the processes by which military norms and practices are extended to the civilian realm. Enloe, Maneuvers: The International Politics of Militarizing Women’s Lives; Sjoberg and Via, Gender, War, and Militarism: Feminist Perspectives; Shepherd, ‘Making War Safe for Women?’

[2] This does not constitute an endorsement of fixed gender roles but a reference to archetypal Western societal gender roles.

[3] The interviews were conducted in 2020 as part of the author’s Master’s research project. The participants, 17 women and 8 men, were recruited through snowball sampling. 20 were officers and 18 came from the army environment.  Interviewees were from a variety of army trades, ranging from combat arms (7) to medical (3) to logistics (3). Communications officers and technicians (3), an administration clerk and a military police officer were also interviewed. Interviewees from the air force environment were pilots (3), supply technicians (2), air weapons system technician (1), and aerospace engineer (1).  Interviews ranged from 45 minutes to two hours. In a semi-structured format, participants were asked ten questions and their answers prompted different follow-up questions. The first two questions covered contextual information about their deployment and previous operational experiences. Participants were asked to describe the types of tasks they conducted and explain what a typical day was like in theatre, if there was such a thing as a typical day. They were also questioned about their perception of the mission’s effectiveness, and the types of interactions they had with other actors like NGOs or civilian populations. Female interviewees were asked if they thought they could perform certain tasks differently, and if they received certain tasks because of their gender. Male interviewees weighed in on these questions and on the roles of the women who were deployed with them. Finally, they were asked to give their opinion on policies linking gender and operational effectiveness. 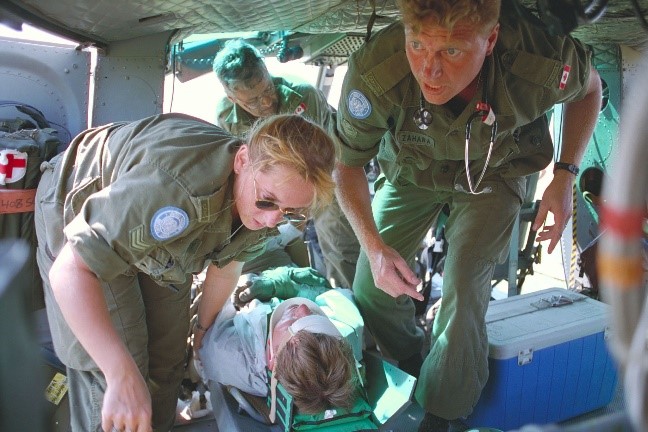