In the summer of 2020, tension can be seen in the South China Sea between China, on the one hand, and several Southeast Asian states and the United States, on the other. While the rise in economic and military power of China has not ceased to become clear in the region for several years, recent developments seem to reflect the Chinese desire to further assert its claims in this maritime space.

On March 3, 2020, a Chinese coast guard vessel rammed and sunk a Vietnamese fishing vessel near the Paracel Islands, disputed between Beijing and Hanoi, and occupied by the Chinese since 1974. On April 17, a coast guard vessel of Malaysia reported the presence in the Malaysian Exclusive Economic Zone of a Chinese oil exploration vessel escorted by seven Chinese Coast Guard vessels. Malaysia has not officially responded to this violation of its exclusive economic zone (EEZ), but the coast guard continued to monitor the Chinese vessel. In early July, China carried out military maneuvers around the Paracel Islands, then again in August simultaneously in four seas surrounding China. Finally, at the end of August, following an overflight of the Gulf of Bohai by an American spy plane, the Chinese navy fired two anti-ship ballistic missiles in the South China Sea. In addition, the number of “freedom of navigation operations”[1] carried out by the United States in the South China Sea went from zero in 2014 to two in 2015, then three in 2016, six in 2017, five in 2018 and new in 2019.

While the US Navy is not left out, renewed Chinese aggressiveness has sparked widespread disapproval in the region. Even the Philippines, which President Duterte has consistently drawn closer to China while distancing itself from the US ally, responded by showing solidarity with Vietnam. In July, breaking with its traditional position of neutrality on the issue of conflicting claims in the South China Sea, the United States firmly rejected Chinese claims. Mike Pompeo, the US Secretary of State, has bluntly condemned what he believes reflects Beijing’s desire to consider the South China Sea under its sovereignty. In April 2020, the US Navy conducted maneuvers with Australia in the South China Sea, followed by new maneuvers in July, involving, exceptionally, two aircraft carriers.

Considering from both sides, is this an attempt by China to further advance its positions in the China Sea, or is it taking advantage of the economic and political difficulties of the United States and its allies caused by the pandemic? What exactly is it?

Chinese policy in the South China Sea dispute is characterized by three major points: alternating crises followed by periods of appeasement; the refusal to recognize the principles of international law of the sea while maintaining a great ambiguity on the nature of Chinese claims; a clever policy of division among the countries of the Association of Southeast Asian Nations (ASEAN).

First, the region has already seen other episodes of heightened tension, usually as a result of Chinese initiatives. China is clever and carefully targets its interventions in order to minimize the political impact of its actions, thus gradually advancing its military positions and political interests. As the last power to occupy islets in the Spratley Archipelago, it occupied a few positions in 1988 following a naval confrontation with Vietnam alone, playing on the division caused by the alignment of Hanoi with the Soviet bloc. In 1995, China extended its positions at the expense of the Philippine sector, without a settlement being reached. China subsequently played appeasement with negotiations on a Code of Conduct, which went unheeded, then offered the possibility of joint development zones, notably in 2005 with the Philippines, then in 2013 with Vietnam in the Gulf of Tonkin and again in 2017 with the Philippines. These projects have never come to fruition.

In 2014, a severe crisis began when massive land reclamation work on the islands occupied by China was discovered, with the aim of building airfields, hangars and docks, therefore, what appears to be the construction of military support points. China is not alone in this major work; Taiwan, Vietnam, the Philippines and Malaysia also backfilled and expanded their islets to develop military installations, but the extent of the work carried out for the Chinese garrisons was beyond measure. The Pentagon estimated the backfilled areas on the sea, from December 2013 to June 2015, at 2,900 acres (1,173.6 hectares) by China, 80 (32.4 ha) by Vietnam, 70 (28.3 ha) by Malaysia, 14 acres (5.67 ha) by the Philippines and 8 acres (3.24 ha) by Taiwan. Once its positions were strengthened, China relaxed its pressure for a few years. The current crisis therefore seems to mark the recurrence of this Chinese strategy of alternating pressure and appeasement.

Second, in 2016, the Permanent Court of Arbitration (PCA), seized by the Philippines, rendered a judgment invalidating any claim to maritime space from the islets of the Spratleys, as well as any claim based on the notion of historical title. The Court did not rule on the claims of sovereignty over the islets, but clarified that they could only generate territorial waters, thereby destroying any legal basis for extensive claims of sovereign rights on the part of China. Beijing refuses to recognize the judgment, while maintaining an ambiguous line, refusing to specify how the limits of its claims in the South China Sea (the famous nine dashes) were drawn, nor the nature of the waters thus defined: territorial sea, exclusive economic area, or simple maritime zone in which the islands belong to it? The behavior of China and its coast guard, intercepting foreign trawlers and drilling platforms, increasingly militates for a claim corresponding at least to an EEZ, but whose scope is in clear contradiction with the principles of the Convention on the Law of the Sea (UNCLOS), especially since the PCA judgment of 2016.

Third, China has skillfully played on rivalries between ASEAN players and occasional friction with the United States. Thus, the tactics of selective targeting of countries targeted by China’s coups, discussed above, have enabled Beijing to avoid forming a common front. In 1988, China attacked only Vietnam, then isolated in a context of the Cold War, thus eliciting only weak reactions from the other protagonists, even though this conflict allowed China to take a military position in the Spratley Archipelago. In 1995, China occupied positions only in the Philippine sector of the Spratleys, again provoking a weak reaction from members of ASEAN, and again in 2012 with the capture of the Scarborough Reef. In 2013, when the Philippines lodged their complaint with the Permanent Court of Arbitration, other ASEAN members involved in the conflict offered little support.

Providing solid political and economic support also allows Beijing to develop strong relations with certain members of ASEAN, in particular Thailand, which hardly seems to prioritize diplomatic action to counter China in the South China Sea, and especially Cambodia, whose regime and economy enjoy unwavering support from Beijing. In return, Cambodia has twice blocked ASEAN draft motions, in 2012 and 2016, addressing the political and military situation in the South China Sea.

Security Implications and Strategy for Canada

China seems clearly determined to deploy a long-term strategy in order to advance its interests and demands. China knows how to play with divisions between ASEAN countries to advance its positions and has been able to avoid any casus belli with the United States. The security risk, in the short term, is relatively low: it resides essentially in the gradual increase in the solidification of Chinese positions and the possibility of prevailing its claims over the disputed archipelagos and the maritime areas of the South China Sea; and in the risk of seeing American FoNoPs slip into a crisis, or even a military incident.

Until the United States itself ratifies UNCLOS, any Washington argument based on the international legal order, even though China ratified UNCLOS in 1994, will be seen as very limited, if not biased. Moreover, in the eyes of an increasingly uninhibited China, the very reading of international law is becoming divergent from that of the West. Thus, for China, the military maneuvers of a third state are not acceptable in the EEZ, while the West contends that nothing of the kind is in UNCLOS. And China Persists in Dismissing 2016 PCA Judgment.

Washington’s unilateral display of naval power, especially if it relies on the active participation of allies in the region, may send a message of deterrence, but this arm wrestling strategy can be risky if only for friction on the ground. It will take careful multilateral diplomacy to persuade China to engage in negotiations with ASEAN to find a rules-based solution. For the moment, China rejects any multilateral negotiations. Washington’s military maneuvers and bilateral security agreements must be matched by efforts to strengthen ASEAN’s capacity.

This capacity is up to the states of the region to find it, by silencing their differences (rivalries over the overlapping claims of maritime areas, disputes over the occupation of certain islands) to develop a common front as broad as possible, in the absence of an illusory common front from ASEAN. Thus, the Philippine President Duterte, a long time very pro-Chinese leader, approached Vietnam and Malaysia after his election in 2016, noting the rigidity of China in the dispute over the fishing zones and the occupation of Scarborough Reef. Indonesia, faced with recurring incursions by Chinese ships and trawlers into its EEZ northeast of the Natuna Islands, is ostensibly moving closer to Kuala Lumpur and Hanoi. As the Vietnamese Prime Minister said in November 2019 at the ASEAN summit, “in 2020 we want to focus on strengthening the sustainable cohesion of ASEAN by supporting solidarity and unity…”

Canada has long made significant efforts to foster dialogue among the protagonists in this dispute, funding and facilitating informal discussions around the turn of the century, from the late 1980s until about 2006. Without turning its back on this openness, and while pursuing diplomatic action to moderate American action, it now seems more appropriate to work for the construction of a real consensus in maritime Southeast Asia for a strong common position against China.

[1] Freedom of Navigation Operations, FoNoPs, are naval operations aimed at deliberately ignoring claims that Washington deems excessive, or at manifesting a political message. In the South China Sea, these are ships entering the territorial waters of the Paracel Islands, fully occupied by China since 1974 but claimed by Vietnam. 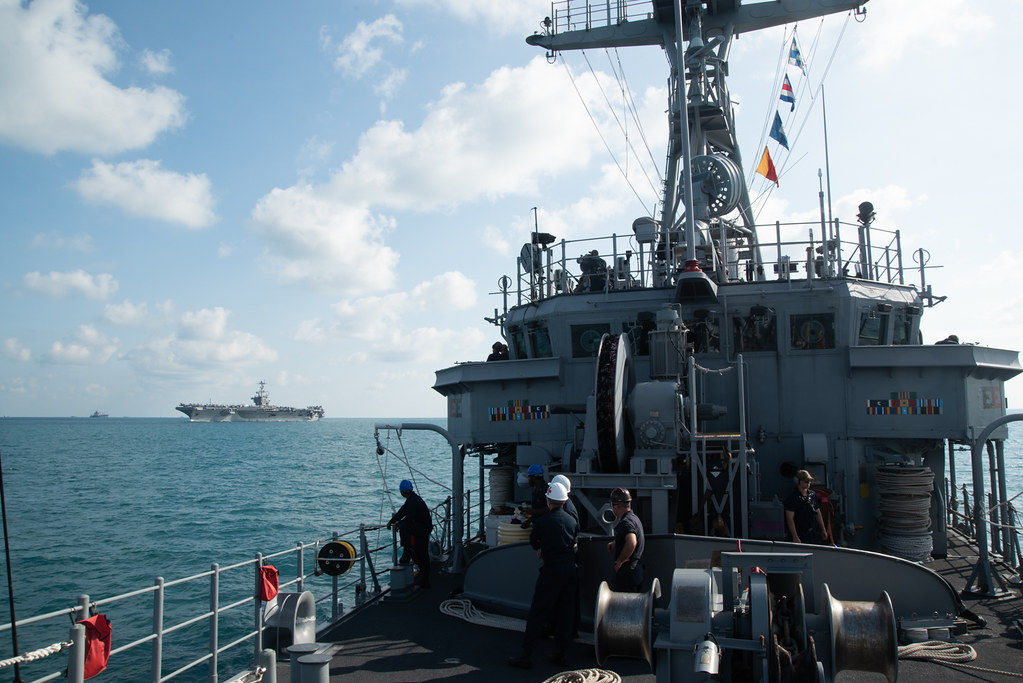