Kerry Buck was most recently Assistant Secretary to the Treasury Board, Economic Sector, from 2018 to 2021. Prior to that, she was Canada’s Ambassador and Permanent Representative to NATO from 2015 to 2018.  Ms. Buck is a career diplomat who was Political Director and Assistant Deputy Minister for International Security and Political Affairs, and served in Assistant Deputy Minister positions on Afghanistan, Africa, Latin America and the Caribbean and Director General for the Middle East and Maghreb. Earlier in her career she was posted to the Canadian Permanent Mission to the United Nations in New York. Ms. Buck led Canadian government Task Forces for Afghanistan, Russia/Ukraine, Syria, Mali, the Haiti earthquake and other foreign policy and humanitarian crises. Throughout her diplomatic career, she supported Prime Ministers and Foreign Ministers at the G7 and NATO Summits and represented Canada at the UN, G7, NATO, OAS and OSCE on issues of human rights, security, disarmament, terrorism and humanitarian affairs.  She represented Canada on international negotiation of Women, Peace and Security issues from 1992 to 2018, helping build international law and practice on combatting gender-based violence.

Ms. Buck also served in the Privy Council Office, the Canadian Human Rights Commission, the International Development Research Centre, the Constitutional Law Bureau of the Office of the Attorney General of Ontario and the Ontario Native Affairs Directorate.  She is currently a senior fellow at the Graduate School of Public and International Affairs at the University of Ottawa, Senior Mentor at the Canadian Forces College and member of the Boards for the Conference of Defence Associations Institute and the Réseau d’Analyse Stratégique. 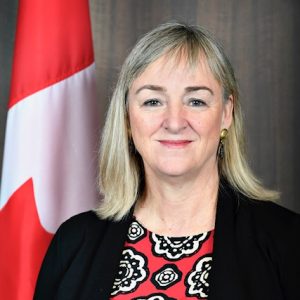 Kerry Buck was most recently Assistant Secretary to the Treasury Board, Economic Sector, from 2018 to 2021. Prior to…
Videos